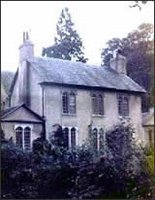 Apparently, Virginia Woolf based her short story A Haunted House on a real house, leased by herself and her husband, called Asham House (pictured here and unfortunately demolished in 1994). Here is what Leonard Woolf had to say about Asham:

Asham was a strange house. The country people on the farm were convinced that it was haunted, that there was treasure buried in the cellar, and no one would spend the night in it. It is true that at night one often heard extraordinary noises both in the cellars and in the attic. It sounded as if two people were walking from room, opening and shutting doors, sighing, whispering…I have never known a house which had such a strong character, personality of its own – romantic, gentle, melancholy, lovely. It was Asham and its ghostly footsteps and whisperings which gave Virginia the idea for A Haunted House and I can immediately see, hear, and smell the house when I read the opening words:

'whatever hour you woke there was a door shutting. From room to room they went, hand in hand, lifting here, opening there, making sure – a ghostly couple.'

I must read this! I'd be feeding my Woolf obsesseion and reading for the RIP challenge too!

Oh, yes, it's very short and very good. And look at that house -- I can hear floorboards creaking from here!

I didn't know that! How creepy!

That is a really cool looking place and a great story too!

I bought this book when I was binging on Virginia Woolf books. It looked really good. I should pull it out and read it, too. I love the house by the way.

It is very stranger but also interesting.

I belief that houses have mind.