Hello, just thought I'd take a quick moment to point out some interesting posts I've read:


1. LK got a mention on Austenblog.com! (See Weekend Bookblogging, Oct. 14, 2007.) This is a really great website for all things JANE.

2. Danielle has posted some wonderful observations about The Horla, one of my horror short picks and this month's selection over at A Curious Singularity.

3. I didn't like I Am Legend, but here's an objective, interesting take on the novel from Biblioaddict. (Plus an interview with Matheson!) I guess this novel got under my skin, despite the fact that I personally had issues with it. Can't give up on Matheson yet.

5. In preparation for my upcoming trip to Spain (less than 3 weeks!!!), I'm reading Barcelona by Robert Hughes. I am planning to write a travel article on my visit, but it seems Hughes has covered just about everything! A little hard going, but great resource for anyone who may be traveling to Barcelona.
Posted by LK at 9:20 AM 12 comments:

Thanks for the great response on horror short stories! Here is the list I have compiled. If I’ve missed anyone, please leave a link or your story choices in the comments. I haven’t decided on which one(s) I will be reading – there are so many good ones…probably The Body Snatcher, plus something by M.R. James, which Eloise from By the Book Piles highly recommends.

Lots of good stuff for next year, too.

Deborah at Book Rage
Don't Look Now, Daphne DuMaurier (Deborah says this story and The Blue Lenses, which was one of my picks, is in the anthology Echoes from the Macabre)
An Unlocked Window, Ethel Lina White
The Jolly Corner, Henry James
The Turn of the Screw (novella), Henry James

Eva at A Striped Armchair, with her comments
The Cask of Amontillado. Edgar Allen Poe. I found this incredibly creepy, and I'm pretty sure it gave me nightmares for quite awhile.
The Birds, Daphne du Maurier. You can tell I didn't read a lot of horror short stories before the R.I.P. II challenge!
The Lovely House, Shirley Jackson. (see above)
Riding the Bullet, Stephen King. I think King is scarier in short story form than novel form, and a lot of the stories in Everything's Eventual were creepy. This one has stayed with me, though.
Snow, Glass, Apples, Neil Gaiman. Oh my gosh-this is easily one of the creepiest stories I've ever read. It actually made the hair on my arms stand up.
The Thing in the Wood, A.S. Byatt. Also a very spooky tale, one that I still remember vividly after six years.

Snacky Wombat at Minus the Spine
Condemned door or The Bestiary, Julio Cortazar

Eloise by the Book Piles, with her comments
Number 13, MR James. My absolute, number one, favourite ghost story. A hotel guest in room number 12 finds he has a bizarre next door neighbour.
Carmilla, J Sheridan Le Fanu. Seminal vampire story, quite long though for a short story.
The Judge's House, Bram Stoker. A young man rents a house to get some work done but is annoyed by a rat. Scary with a shocking ending. Brilliant.
The Picture in the House, HP Lovecraft. I think this scared me more than any other story has ever done. A young man shelters in a run down house where he finds a valuable book open at a certain picture.
The Strange Case of M Valdemar, Edgar Allen Poe. This is a truly ghastly story, and thought-provoking, as the best Poe stories always are.
The Kit Bag, Algernon Blackwood. Very very creepy. A real hairs-rising-on-the-back-of-the-neck story.
To be Taken with a Grain of Salt, Charles Dickens. A classic tale of retribution from beyond the grave.
The Grey Woman, Elizabeth Gaskell. This is a terrific piece of nail-biting gothic horror as a young woman makes a bad marriage.
The Open Door, Charlotte Riddell. The tale of a young man who decides to solve the mystery of a house where a door just won't stay closed. I enjoyed it immensely. This is in the Oxford Book of Victorian Ghost Stories (as is the Blackwood) which is a very good collection.
The Canterville Ghost, Oscar Wilde. Very funny and quite poignant, as a ghost comes face to face with the modern world.
Posted by LK at 8:54 AM 1 comment: 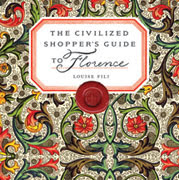 Hello, and thanks for your good wishes. I had a chance to sleep off the worst of whatever on Friday.

Just wanted to share this cool site with fellow aficionados of literary travel guides and such: The Little Bookroom.

How can anyone resist a title like the Civilized Shopper's Guide to Florence?

Or notecards fashioned after old romance book jackets?
(Just HAD to include the one to the right!)