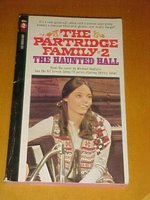 It's Friday. The end of a truly noxious week here in an anonymous cubicle somewhere in the heart of San Francisco. I'm ready for a bit of nonsense...

Don't know why, except the synapses are starting to fray at the edges, but I started to reminisce about books I was quite fond of as a pre-teen. It took a bit to recall the titles, but I did. Here's the list, and what I can recall about each book. Does anybody else remember these? Please, add more to the list!

Maureen Daly, Seventeenth Summer. Man, I read this one many times over, when I was 10, 11...? I swooned over the part where Jack kisses Angie for the first time: End of summer, autumn chill in the air, they went to pick tomatoes or something, and then Jack took Angie's face in his chilled, muddy hands, and...

It was a great scene; the whole book built up to it. I'm glad I was young when I was young. I'm sure that a little old kiss at the end of the summer wouldn't be half so thrilling to 10-year-olds these days.

I also remember something about the older sister Lorraine washing her slips out every night in the sink, the hot mugginess of the summer nights, and a sense of ineffable longing.

Paul Zindel, My Darling, My Hamburger. I remember it was funny. I remember someone named Liz and I think her boyfriend was Sean. I don't recall a hamburger. I think kids still read this book, don't they?

Patricia Dizenzo, Phoebe. I was in the sixth grade (Catholic school, Sister Mary Ann and her cat's-eye glasses) when I checked this book out of the local library. It was about a girl getting pregnant. Very racy for my milieu. Naturally, all the other girls in the sixth grade wanted to borrow it. Naturally, I was eager to loan it out. Well, my best friend Cheryl was reading it during a study period and got caught and snitched on me. Sister Mary Ann, who I suspect was actually Andy Dick in a nun's habit, was shocked and called my mother to let her know I was reading a book that -- here her voice lowered to a whisper -- included the words "missed period" on the book cover flap. When I got home my mom asked to look at the book, read the inside flap and then handed the book back to me, saying in her best semi-bored tone, "Just don't take those kinds of books to school anymore."

The Partridge Family #2: The Haunted Hall. Two things I remember about this book: I read this over and over until some of the pages stuck together when I accidentally spilled chocolate pudding on it. It was supposed to be a gothic, as I recall, and I remember that Laurie Partridge (the book's heroine) referred to Heathcliffe in it, which somehow seemed extremely romantic to me (I was 10, okay!). Can you believe someone is auctioning this book on eBay? Very tempting.

Judy Blume, Are you there God, It’s me Margaret? I remember laughing out loud and being somewhat shocked (and delighted, naturally) over Margaret's precocious conversations with God. Talk to God about periods (missed or otherwise)? What a rebel! (I was going to a school where we weren't supposed to wear shorts under our uniforms because it was deemed unladylike. I asked a priest -- Father Deacon -- no lie -- how the teachers could tell if we wore shorts under our uniform or not. I got kicked out of class. Another time he put his hands over his eyes and said "Ladies, cross your legs. I'm seeing things I shouldn't see." And I said, "Why are you looking?" I got kicked out for that, too.)
Posted by LK at 3:09 PM 8 comments:

Before I begin, let me say, before I’m accused of crankiness, that I admire James’s prose; let’s face it, the guy knows his way around a sentence. The book I purchased with Turn of the Screw also includes other shorter novellas (Daisy Miller and The Aspern Papers, among others), which I plan to read. I also intend to keep my promise of a Thanksgiving Readers’ Choice (if you want to weigh in, click here.)

There are so many ways to read this story, one can get lost. I choose to focus on two aspects that struck me as I read: the male/female dynamic and the recurrence of the word “innocent.”

To me, the ghosts represent corruption – the corrupt aspect of a male/female union, if you will. In James’s time, the corruption lay (by implication of the governess and Mrs. Grose) in the fact that the unmarried Miss Jessel had carnal relations with Quint—the twin sin being fornication with a man of a lower class. The children, of course, represent the uncorrupt aspect of male and female, not only by virtue of their youth but also by the fact that they are brother and sister (and therefore, a nonsexual relationship). The tension set up by this dynamic is strengthened by the representation of another type of male/female relationship, that of the governess and her employer. This relationship does not enjoy a clear role assignment, nor absolute boundaries. The master is utterly absent and disinterested; yet, he wields quite a bit of authority over the governess. The governess, on the other hand, becomes almost inexplicably devoted and loyal to her employer, even willing to put her charges at risk to please him. The master is of a higher class than his employee, which would preclude his marrying her, yet she seems content to capture his affections in the only way she knows how: by eradicating herself from his life. James further turns the screw on this dynamic by omitting from his story the most socially accepted form of male/female relationships: the married couple. The innocent children are essentially orphans, a plight which the story glosses over. These innocent, charming, beautiful creatures are forced to be parented by an absent patriarch and all-present matriarch.

Ultimately, the imbalance in the relationship between the master and the governess harms the children. The governess takes on all responsibility, and the children are at the mercy of her world-view. In her zeal to protect them, she destroys their innocence—she ruins the very thing she has sought to preserve. (Maybe George Bush could read this after he finishes The Stranger.)

One particular red herring that bothered me was the fact that that neither the governess nor Mrs. Grose queried the schoolmaster about Miles’s dismissal. The governess is spirited enough to take on ghosts; can’t she even buck authority enough to ask a lowly teacher about such an important issue? Within the convention of the story, of course, the governess couldn’t find out, so James just sidestepped the issue.

I’ll end here, and add my bit about the recurrence of the word “innocent” in the next post.
Posted by LK at 8:36 AM 1 comment:

RIP Challenge #3 - The Turn of the Screw, Henry James

Chill Factor: A sprinkle of hair-raising with intermittent goosebumps

I was hampered in this reading by two things: Henry James’s prose and the fact that I’ve seen the Deborah Kerr movie. Therefore, I read this novella twice.

Reading James is a little like riding a bumper car: You never know when you’ll have to switch directions to avoid getting slammed from behind. Example:

It took of course more than that particular passage to place us together in presence of what we had now to live with as we could—my dreadful liability to impressions of the order so vividly exemplified, and my companion’s knowledge henceforth—a knowledge half consternation and half compassion—of that liability.

Having gotten past those first two obstacles—rereading helped believe it or not, my understanding if not my humor—though I wonder if having said I read it twice, I am not adding the liability henceforth of writing like James himself—the first issue to address, I suppose, is: are the ghosts in this story real?

James leads us to believe they are. How else does the governess describe (down to the red hair) Quint so accurately, so soon after arriving at Bly? But if you believe the ghosts are real, does that lead you to question your own sanity?

Okay, maybe the governess happened to see a daguerreotype (a four-color one, the first of its kind) of the scoundrel that happened to be propped on a fireplace mantel, and she is such a smart governess, she guessed who the man was. Then her whole story makes her the whack job (not you). Which makes her whole account noncredible. So, why read the story?

Hmmm...something’s getting screwed, all right. Thanks, Henry.

I am going to handle the whole ghost question by reading this story as any other ghost story and accepting the literary conventions of the genre. Perhaps James even left a signpost for me, by using the device of a story within a story (the gentleman’s story of the governess’s written account). A similar device is used by Irving in Sleepy Hollow, among many other ghost stories.

Given that the ghost is real within the realm of the story, I turn to other literary devices to guide me as to how to read it: to wit, motif and metaphor. Analyzing just these two devices (forget POV, voice, theme and other literary whatnot), trying to keep track of motifs and metaphors in this story is about as fruitful as trying to figure out whether or not the governess is a reliable narrator. For a novella, James virtually crams motif and metaphor into every nook and cranny. Light/dark, silence/quiet, vision/sight, the turning screw. My God. You can’t turn a page without dusk falling or a candle being snuffed out.

In this way, I think James ultimately deflates his story. It is so loaded as to be ambiguous. And the ambiguity he creates ultimately did not satisfy me as a reader. I enjoyed the idea, I lived with the execution, but I did not give a whit about the resolution--which is to say, no resolution.

There are almost too many puzzle pieces, and once assembled, they don’t ever quite present a whole picture. Or, maybe this is more like it, James creates a veritable maze, where all paths are dead ends. (I should teach James a lesson and add a bunch of other metaphors here, but I am sure you get the idea.)

However, I am going to isolate and analyze a few of the many maze-paths James left in my next blog post, namely, the male/female dynamic and the repetition of the word “innocent.”

Just when I thought I was busy, things amped up about 100%. I intend to catch up on my blog reading and posting soon. (I finished "The Turn of the Screw," "The Dead," and "In the Eye of the Sun." Much to mull over.) I also am considering printing up a T-shirt that I can wear around the office: "I'd rather be blogging." On second thought, probably not a great idea.

In lieu of a literate post, here's a recipe for Ichabod Crane Pumpkin Cream Cheese Muffins. The best I can do for today!

Method:Oven at 400 degrees. Grease the bottoms only of 12 muffin cups, or line with paper liners. Mix eggs, pumpkin, milk and oil. Stir in the dry ingredients just until flour is moistened. Fill muffin cups about 2/3 full. Prepare cream cheese filling: mix 1 (3 oz.) package cream cheese, softened, with 1 tablespoon milk and 1 tablespoon sugar until smooth.Place about 1 teaspoon of this mixture on top of each muffin; swirl with a knife. Bake 20 to 22 minutes until golden brown. Remove muffins immediately from pans. 12 muffins.
Posted by LK at 11:18 AM 6 comments: