Salon's literary guide to the world

If you're bored with the books you have and looking for a new title, check out Salon's Literary Guide to the World. I think I'll do my own version soon...
Posted by LK at 5:40 PM No comments:

Thoughts for Thursday - why write and other silly ruminations

I figured it out! The answer to the central question of my existence: Why write? All my life people have told me, "You have a really unusual way of looking at things." A pretty cool trait, if you're a writer -- at the very least, it's quirky. If you don't write, however, this could be taken as a sign of psychosis. So, to preserve my mental standing in the community, I must write fiction. As this is Thursday and I am giddy with boardroom-battle fatigue, I find this highly clever reasoning. Well, it's as good of a motivator as "money," "fame," or that other worn-out chestnut, "to bring peace and love to the entire universe."

As you have probably deduced, I didn't really have a good blog subject. Then I thought I'd address a vital issue that has been perplexing me as of late: Whatever happened to Mexican jumping beans?

When I was in grammar school, the new school year couldn't begin without at least one classmate 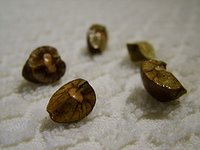 bringing a spastic imitation-coffee bean in a small, clear plastic box because he didn't have seashells or a pair of moccasins to exhibit for show-and-tell. Maybe it's because I'm over 10 (way, way, way, way over 10) that I'm not privvy to the phenomenon of Mexican jumping beans, but then again, I don't recall my niece and nephew ever playing with them. Are they politically incorrect? Bad for the environment? Toxic? I guess the answer is more obvious: They simply are low-tech. You hold one in your palm and it rolls around a couple of times. Big deal. A little brown bean containing a moth larvae jouncing in its final birth throes. Ugh, kinda gross, too. Come to think of it, Mexican jumping beans didn't really hold my attention for more than five, six seconds when I was a kid. Maybe Mexican jumping beans were only a temporary rite of passage even then, a phase that passed faster than jawbreakers and Slinkys. They sure didn't hold a candle to Barbie dolls.
Posted by LK at 8:35 AM 6 comments:

Atmosphere: Hijinks in the air

What a delightful tale to read. Not spooky (as it seemed when I was a child), but very atmospheric, as this early account of Sleepy Hollow demonstrates:

Not far from this village, perhaps about two miles, there is a little valley, or rather lap of land, among high hills, which is one of the quietest places in the whole world. A small brook glides through it, with just murmur enough to lull one to repose; and the occasional whistle of a quail, or tapping of a woodpecker, is almost the only sound that ever breaks in upon the uniform tranquillity.

That’s a pretty tricky way to lull a reader into a gothic tale. Next, we meet our hapless hero, Ichabod Crane memorably described as:

…tall, but exceedingly lank, with narrow shoulders, long arms and legs, hands that dangled a mile out of his sleeves, feet that might have served for shovels…To see him striding along the profile of a hill on a windy day, with his clothes bagging and fluttering about him one might have mistaken him for the genius of famine descending upon the earth, or some scarecrow eloped from a cornfield.

Irving really is a master at description. I especially enjoyed the way he captured the essence of the time and place:

I found it quite interesting how this story – considered one of the earliest examples of literary writing from the new world – deals with fundamental American traits that exist to this day: a can-do belief in the ability to improve one’s status; a naiveté about the larger world, combined with a rapacious sense of individual entitlement; and trust in westward expansion. And maybe Irving is poking a little fun at it, for, woeful as Ichabod is, with his not-very-appealing looks and less-than-appealing career prospects, he positively salivates over the prospect of marrying Katrina:

From the moment Ichabod laid his eyes upon these regions of delight, the peace of his mind was at an end, and his only study was how to gain the affections of the peerless daughter of Van Tassel.

Irving has been criticized by some as having stories with no morals and writing strictly for an audience (the first Dan Brown, perhaps?). But I believe Irving is mocking the superstitions of the townspeople who are “given to marvelous beliefs,” and Ichabod himself, who, though an educated man,

..was, in fact, an odd mixture of small shrewdness and simple credulity. His appetite for the marvellous, and his powers of digesting it, were equally extraordinary; and both had been increased by his residence in this spellbound region. No tale was too gross or monstrous for his capacious swallow.

Couldn’t Ichabod serve as a metaphor of America itself, especially in the immediate post-Revolutionary period (and perhaps even now): Outsized and awkward, starry-eyed while ambitious, impoverished yet abundant, democratic but status-conscious?

At the story’s end, Ichabod pays for his overarching aspirations – and because of his superstitious beliefs. On a ride homeward one lonely autumn night, Ichabod falls prey to the local legend of the Headless Hessian and disappears under mysterious circumstances:

…The schoolmaster now bestowed both whip and heel upon the starveling ribs of old Gunpowder, who dashed forward, snuffling and snorting, but came to a stand just by the bridge, with a suddenness that had nearly sent his rider sprawling over his head. Just at this moment a plashy tramp by the side of the bridge caught the sensitive ear of Ichabod. In the dark shadow of the grove, on the margin of the brook, he beheld something huge, misshapen, black and towering. It stirred not, but seemed gathered up in the gloom, like some gigantic monster ready to spring upon the traveller.

What happened to the hapless Ichabod Crane? We never quite know, though there is much surmising on behalf of the townspeople. A smashed pumpkin near the scene of Ichabod’s disappearance would suggest a prankster in the order of Bram Bones was the true culprit. There is speculation that Ichabod found a new life elsewhere (a reflection of the American belief in the pioneering spirit and westward expansion), but true to their credulity, the townspeople finally are willing to lay blame on the headless horseman. Perhaps the real horror of the story is not that Ichabod Crane could have been carried off by an apparition; rather, it is his lack of bonds to the community and greater world, and the community’s ready dismissal of him (a form of alienation, also a trait peculiar to America):

…when they had diligently considered them all, and compared them with the symptoms of the present case, (the townspeople) shook their heads, and came to the conclusion that Ichabod had been carried off by the galloping Hessian. As he was a bachelor, and in nobody’s debt, nobody troubled his head any more about him.

At three a.m., the night after the Sept. 11, 2001, attacks, I woke up with a sensation of falling from a great height, suffocated in a cloud of dust. I couldn't sleep. So I took out my pen and notebook. This is what I wrote (unedited):

On Tuesday, Sept. 11, 2001, our landscape changed irrevocably. Not a single shot was fired. No protests were uttered. No cause was identified.

Yet we understand that we are now forced to acknowledge an ideology foreign to us: the power of the unknown.


The lack of overt purpose in the attacks leaves us cold. What is to be gained, we cry. We cannot help it: it is the capitalist in us. Surely, we cannot be appalled at a random act of violence when we live daily with violent crimes that are committed for less reason than pleasure or perversion. We understand and tacitly approve of criminal actions, however despicable and self-serving, if there is gain. Now we are confounded by criminals who, having perpetrated so spectacular a rampage, refuse to claim the spotlight.

What do we do with an unacknowledged enemy that acts on its own terms for no other reason than to satisfy its own set of privately held dogma, whether or not anyone else holds meaning in it? Unlike great revolutionaries of the past— Luther, Lenin, Marx--we are not clear about what action or stance, if any, these terrorists want us to take. Overthrow the government? Protest the war in the Middle East? Eliminate capitalism? Worship Allah? We ourselves are unsure who to hunt; there are no Huns, no Japs, no Blues, Greys, or Reds.

This is a new world order: nomadic ideology, not connected with a state power, a revolution, a civil war. Warriors take their show on the road, like a circus act, playing before a new audience every night. It is battle of happenstance, not fixed, but evolving around a morphing and murky set of conditions. Like foul weather, it appears in various guises, at various times, depending on a fickle mix of elements, such as geography and political climate.

The only sure thing we can hold with certainty after this disaster is terror at the capriciousness of life. On some level, this act of terrorism must force us to acknowledge how out of control modern life is. We feel how fragile our complex infrastructures, how naïve our sophisticated lifestyles, how vulnerable the heart of our civilization is to arrest.

We are living as in a house of cards that can collapse as suddenly and surely as the proud World Trade Center towers.

It is a little like Alice in Wonderland, every time we look to outside forces to blame we end up staring at ourselves in the mirror. If there is any meaning to glean from disaster, it is how we ourselves our complicit in its happening and how we can change ourselves to prevent a recurrence. We cannot control our destinies but we can direct them.

The landscape is scarred; people are dead. These are the tangible indications of change. The soul is shaken; the enemy unseen. These are the elements of a future unforeseen.

Wake up, America. The world is edging in on us, from its many corners.
Posted by LK at 7:45 AM 1 comment: