Be careful or you could be fined.

Well, you are all more than kind to welcome me back. Thank you!

Today I fess up that I haven't started my RIP reading yet. I am waiting for the Wilkie Collins book to arrive. I want to be sure and finish that one, if nothing else, for the challenge.

And a recommendation for everyone: If you haven't read Zeitoun by Dave Eggers, please be sure to add it to your list. Even if you hated Heartbreaking Work of Staggering Genius. A definite must-read...you will be on the edge of your seat.
Posted by LK at 1:58 PM 6 comments:

I've been gone a long, long stretch - it has been a helluva year, I can tell you that much. Think: California budget cuts. Yeah, education plus recession equals no money for paper clips.

However, I am jumping in for Carl's RIP challenge!!!!

1. The Woman in White by Wilkie Collins
2. Pride and Prejudice and Zombies by Seth Grahame Smith
Posted by LK at 2:47 PM 7 comments:

Writers: get reviewed and distributed online

BookRix.com offers writers a free platform to get their work reviewed and distributed online.

And there's a contest for writers and readers...
Posted by LK at 9:11 AM 3 comments:

Thanks to Sassymonkey for posting this list! It ought to keep many a serious reader busy for years!

Okay, he was never one of my favorites. I thought the Rabbit series were okay, but generally I didn't relate well to the whole older man focused on his sexuality themes that Updike tended to focus on.

Still, you can't get away from his influence on contemporary writing.

One of my very favorite short stories, however, was written by John Updike. It is called A&P. Enjoy.
Posted by LK at 10:34 AM 3 comments:

If you're not Obamafied yet, this is a great New York Times article on books that influenced Barack Obama. Some titles to check into here!

Surgery went okay. I learned I have a low-threshold tolerance for pain.

But I do have a nice pair of gallstone earrings now.

That's it for writing for this week! I'm thinking of taking on some freelance writing or editing assignments. Anybody out there have any ideas? Thanks!

The first book I've completed in 2009! And it was a good one (and a library book, in keeping with my New Year's resolution to be a bit more frugal).

What distinguishes this book from other Einstein biographies is that the author relied on many of the newly released personal letters from Einstein's estate. Therefore, we get a better idea of what made Einstein tick and how he approached his work. Einstein saw it as part of his mission to extend the work of James Clerk Maxwell (who died the year Einstein was born), as a theorist who shed prevailing biases, leading him into the territory of field theories.

Now, I've read the book and still have very little idea of what a field theory is all about. Here's Einstein's take on it:

A new concept appeared in physics, the most important invention since Newton's time: the field. It needed great scientific imagination to realize that is not the charges nor the particles but the field in the space between the charges and particles that is essential for the description of physical phenomena.

This thinking led to the breakthroughs of his "miracle year" - 1905 - that saw the breaks from classical, Newtonian physics and into the revolutionary thinking of relativity - with its unsettling implications that perhaps randomness is at the heart of the behavior of the universe, and not order. What fascinated me was how Einstein basically spent the last years of his life trying to find a way around the theory that he postulated. And it was ironic that Einstein completed his famous paper that would revolutionize science but had not been able to earn a doctorate degree!

At the same time Einstein was deconstructing the universe, the same sort of breaking down of classical conventions was also happening in literature with Proust and art with the Impressionists. It is fascinating that the world as a whole seemed to be at the brink of a new era, in diverse areas, at the same time.

I enjoyed reading about Einstein the man, too, who seemed so humble, humorous, and kind (although not the best in relationships alas). "I regard class differences as a contrary to justice," he once wrote. "I also consider that plain living is good for everybody, physically and mentally."

It is so cliche, but the man was a genius, far ahead of his time. Liberty, he said, is the necessary foundation for the development of all true values.

The book is dead, long live the book

This is a very interesting article (with some excellent book references).

Despite the attention once paid to the so-called digital divide, the real gap isn’t between households with computers and households without them; it is the one developing between, on the one hand, households where parents teach their children the old-fashioned skill of reading and instill in them a love of books, and, on the other hand, households where parents don’t. As Griswold and her colleagues suggested, it remains an open question whether the new “reading class” will “have both power and prestige associated with an increasingly rare form of cultural capital,” or whether the pursuit of reading will become merely “an increasingly arcane hobby.”

There is another aspect of reading not captured in these studies, but just as crucial to our long-term cultural health. For centuries, print literacy has been one of the building blocks in the formation of the modern sense of self. By contrast, screen reading, a historically recent arrival, encourages a different kind of self-conception, one based on interaction and dependent on the feedback of others. It rewards participation and performance, not contemplation. It is, to borrow a characterization from sociologist David Riesman, a kind of literacy more comfortable for the “outer-directed” personality who takes his cues from others and constantly reinvents himself than for the “inner-directed” personality whose values are less flexible but also less susceptible to outside pressures. How does a culture of digitally literate, outer-directed personalities “read”?


What do you think? Are we creating two classes of people, one for the Computer Screen and one for the Book? If so, what are the implications? Is deriding computer screen reading creating a sort of witch hunt mentality, to compensate for a fear of the loss of book reading? Does computer reading make it harder to switch back to the single-focus of reading a book? Or are we magnifying the possibilities of losing the "disciplined companionship" of book reading? Post your thoughts here.
Posted by LK at 3:32 PM 2 comments:

Is it really Friday already? I didn't get much writing done beyond the blogs. Not to excuse myself, but I did get a gallbladder attack (now have to go under the knife), which has set me back at work (trickling over to other areas of my life).

I did submit a short story to an online 'zine, if that counts. And dammit, this week it counts.
Posted by LK at 10:52 AM No comments: 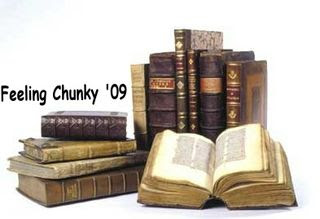 Now I'm getting back into the swing of things: My first challenge!

And I have all year to finish.

This is good news: In Apparent Reversal, Americans Are Reading More Literature, Report Says - I got this item from SFP at Pages Turned.

And check out Andrew's Book Club, which features a new book of short stories to read each month.
Posted by LK at 2:08 PM 1 comment:

Might as well get back on board with this idea.

This week, I actually have something to report, too: I revived this blog and started another: Recessionista, which will follow my travails as we all slog through the economic downturn. I don't want to be a naysayer but let's face it: All of the pundits and financial gurus are even sounding a death knell to the "old" economy (built on air, anyway). I am glad that debt and credit and overspending may be going away, but the little guy will pay for all of the big mistakes that were made by Alan Greenspan, GW, and company.

Okay, I'll save that soapbox for the Recessionista blog.
Posted by LK at 8:43 AM 4 comments:

The White Tiger by Aravind Adiga

Synopsis: A young man in India breaks out of his caste the hard way to become an "entrepreneur."

What Makes It: The voice is sharp and memorable. Think Holden Caulfield without the depression and a lot more huzpah. This debut novel won the Man Booker Prize, if that does anything for you. And the story is really intriguing...you find out more about what India is like, and also how the pitfalls of its democracy mirror our own in the States.
Posted by LK at 3:18 PM No comments:

I hope you all enjoyed your holidays.

This is my first post for a while. I will try to start anew after a rather hellish 2008. My father was very sick all year. He died in October. Between that and a really busy job, well, the blog fell to the wayside.

I could barely read a cereal box, much less keep up any kind of literary book reading!

But, I'm back and hoping to pick it all up again.

Soon I hope to be following my fellow bloggers and being a culturalish kitten once again. This year, though, my library card will need to be put to good use! Got to tighten the belt, you know.