A Child's Christmas in Wales by Dylan Thomas 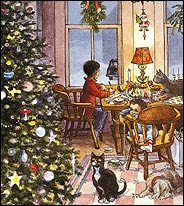 What a charming, delightful book. The language is beautiful, as one might expect from Dylan Thomas. Moreover, there is a melancholy sense of nostalgia to it, the feeling you get as an adult remembering your childhood days of innocence and play.

I was so delighted by the illustrations by Trina Schart Hyman. Apparently, she was an illustrator for Cricket magazine and book illustrator extraordinaire. I am including an example of her work in this post, but I don't think it is nearly as charming as the illustrations for the Thomas tale.

Here is part of the text, which takes place at the end of the day when the family gathers for storytelling. The setting immediately brings on another memory. (The description of the gas meter ticking really got to me. It's such a fine detail -- something so small and specific you feel as if you had been there. The fact that this leads into another memory, makes it even more bittersweet: A child remembering his own childhood. You just know he is growing up!) You'll find the full text here. If nothing else, I hope you can listen to Thomas read his tale. There's something about a poet reading his words that brings the whole expedition to life.

Bring out the tall tales now that we told by the fire as the gaslight bubbled like a diver. Ghosts whooed like owls in the long nights when I dared not look over my shoulder; animals lurked in the cubbyhole under the stairs and the gas meter ticked. And I remember that we went singing carols once, when there wasn't the shaving of a moon to light the flying streets. At the end of a long road was a drive that led to a large house, and we stumbled up the darkness of the drive that night, each one of us afraid, each one holding a stone in his hand in case, and all of us too brave to say a word. The wind through the trees made noises as of old and unpleasant and maybe webfooted men wheezing in caves. We reached the black bulk of the house. "What shall we give them? Hark the Herald?"
"No," Jack said, "Good King Wencelas. I'll count three." One, two three, and we began to sing, our voices high and seemingly distant in the snow-felted darkness round the house that was occupied by nobody we knew. We stood close together, near the dark door. Good King Wencelas looked out On the Feast of Stephen ... And then a small, dry voice, like the voice of someone who has not spoken for a long time, joined our singing: a small, dry, eggshell voice from the other side of the door: a small dry voice through the keyhole. And when we stopped running we were outside our house; the front room was lovely; balloons floated under the hot-water-bottle-gulping gas; everything was good again and shone over the town.
"Perhaps it was a ghost," Jim said.
"Perhaps it was trolls," Dan said, who was always reading.
"Let's go in and see if there's any jelly left," Jack said. And we did that.

Always on Christmas night there was music. An uncle played the fiddle, a cousin sang "Cherry Ripe," and another uncle sang "Drake's Drum." It was very warm in the little house. Auntie Hannah, who had got on to the parsnip wine, sang a song about Bleeding Hearts and Death, and then another in which she said her heart was like a Bird's Nest; and then everybody laughed again; and then I went to bed. Looking through my bedroom window, out into the moonlight and the unending smoke-colored snow, I could see the lights in the windows of all the other houses on our hill and hear the music rising from them up the long, steady falling night. I turned the gas down, I got into bed. I said some words to the close and holy darkness, and then I slept.
Posted by LK at 1:46 PM

This one is on my list. I love the illustrations, too.