Love in Excess by Eliza Haywood 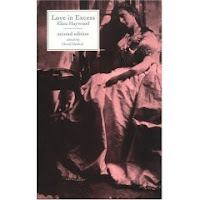 Romance to the nth degree is what you get with this novel.
What initially intrigued me is that this book was as popular in its time as another tome you may have heard of: Robinson Crusoe. And its author was a woman -- possibly the author of the first novel in the English language.
Why, then, I wondered, had I not heard of Eliza Haywood or this novel?
The explanation may lie in the book's major theme: society's disapproval of women who declare their love for men. From this book through Pride & Prejudice and on through The Thorn Birds, women protagonists have been punished for actively pursuing men. The prose, while not altogether overtly sexual, is sexually charged enough (termed "amatory," e.g., a bit more elevated than a bodice-ripper or romance but not quite literary fiction) which must have been quite scandalous at the time. (I can't help but wonder who its main readers were: women or men? Were women made to feel shamed for reading it?) Could a book centered around women with sexual desires have fallen out of favor with the arrival of the Victorian Age?
Another reason why this book may not be as well known as Robinson Crusoe is that the characters are archetypal. This is a plot-heavy book, with a case to make about desire. Character development takes a back seat.
The hero of the book actually is a mimbo (male bimbo), Count d'Elmont. This guy would put Brad Pitt to shame; apparently, no woman could resist his charms. The book's plot centers around all of the women who fall for him (lust or love or a combination thereof). And there are quite a few of 'em.
The book is truly well-crafted. I won't spoil the fun for potential readers, but trust me: You'll need a GPS to navigate the numerous plot lines! Despite the lack of rounded characters, I enjoyed this novel immensely.
Another novel of Haywood's, The History of Miss Betsy Thoughtless, is considered to have heralded an important change in the 18 century English novel, focusing on marriage versus courtship. (Chalk one up for another TBR!)
Ultimately, however, Eliza Haywood may be much more tantalizing than her own characters.
Apparently, she was quite prolific, supporting herself and her two children (there is no record of a husband, interestingly) through writing and acting, translating and publishing. (How busy must she have been!) Her writing drew fire from some of the heavies of her day: Pope and Swift, among others. Beyond that, not many details are known about Haywood's life ... we can only hope some enterprising biographer will choose to go excavating and dig up some dirt. She seems to have been quite the enterprising, energetic woman.
Posted by LK at 3:53 PM

I have never heard of this author or title. It sounds very interesting though. Thank you for a wonderful review. It's now on my wish list.

Haywood sounds fascinating. Why have I never heard of her? This books sounds like the perfect thing to be reading in the month of romance!

What an interesting book and - to echo everyone else - I had never heard of the author either. How very tempting it sounds!

For an excellent discussion on why we haven't heard much about so many women's writing from the past read
Michele Le Doeuff "The sex of knowing".

I haven't read this Haywood novel but you have piqued my interest.

Hi, everyone, thanks for your comments. It was the perfect romantic read for me -- full of passion and declarations of love and twists and turns. If you are in the mood to indulge in a little light reading (yet want enough substance to avoid feeling like a total literary shirker), this is one to read!

What a great discovery! Count me in as another who hadn't heard of her but I'm very intrigued.

Just poppin in to say hello.

Cool that you read this -- I have read it too, although it was a while ago. It's such a shame that 18C women writers aren't better known. Part of it is the canon-formation process, which turned Defoe, Richardson, and Fielding into the "creators" of the novel, and wrote the women out of the story. Modern scholarship is now retelling the story, but this hasn't always gotten out to a more general readership.

Thank you so much for posting about this book! This is the first I've heard about it!!

I had to read Haywood for a class on canonicity... I have to say that most people in the class hated Love in Excess... they found it boring and outdated... Once you get past the difficult syntax it's an okay read, but skip it if you prefer actual action in your plot as opposed to a lot of talking and letter writing... It is interesting however how and why Haywood fell out of the canon for a long time and is now being studied again since in her day her books were wildly popular

There are records of her leaving a guy at some year. He posted a narked ad in a paper (his name was Valentin(o/e) saying (the gist goes): 'if you meet a woman called Eliza Haywood - don't trust her'. it's a horrid ad, but a funny insight. The theory goes that women were supposed to keep their heads down in that time, so they had a lot of free time, with Delarivier Manley and Aphra Behn, Haywood formed the 'Fair Triumvirate of Wit' to entertain all these bored ladies. They were generally upper-class, obviously lower-classes had to work...

Good summary and discussions here. Needles to say Eliza's use of female characters was smart and provocative. She knew what she was doing and whether society approved or didn't, the credit goes to "literature" rather than the content disapproved.